The islands are named after them. When you arrive, you get a passport stamp with a picture of one. You’ll probably find it hard to resist buying a t-shirt with one! Galapagos tortoises are one of the most spectacular creatures you will see when visiting the archipelago off the coast of Ecuador and things are looking up for their survival in the wild. Here’s a little more of what I learnt about them on my visit to the islands… and some cute pics! 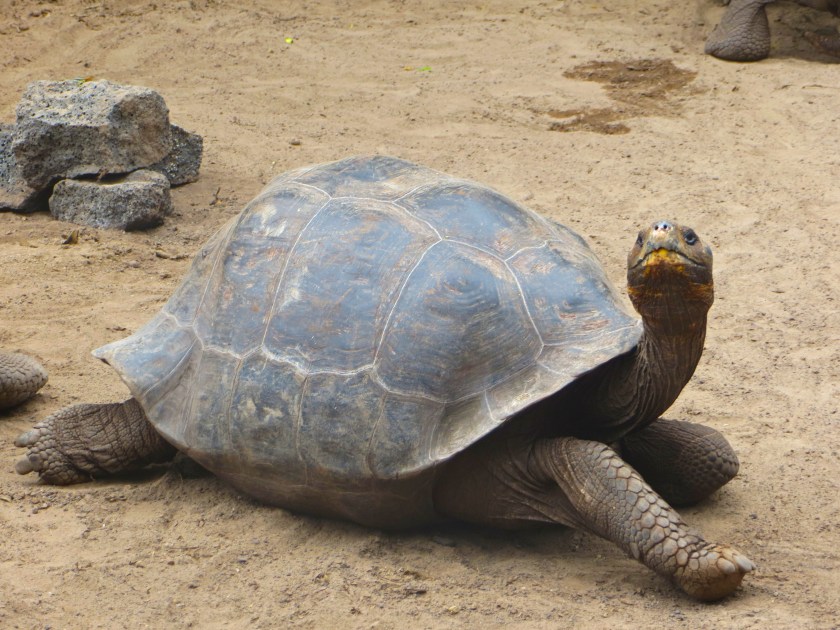 Baby Galapagos tortoises have been born in the wild for the first time in 100 years! Thanks to the incredible conservation efforts that are ongoing on the islands, there is more and more hope for the tortoises. It’s no easy task to ensure the survival of a species and definitely something worth celebrating!

For a tortoise to reproduce in the wild, a lot of factors have to fall into place. The female goes through quite a process to build the nest, digging for quite a few days. Then about 4 to 8 months later the tiny baby tortoise (6cm roughly) will have to dig it’s way back out and try not to either get stuck or drown if the sea comes in.

The young hero will then have to survive it’s childhood and adolescence with several factors against him or her. Predators unnatural to the islands, falling down a crack in a rock or over heating in the midday sun are all risks. It then takes 15 years for the tortoise to mature sexually, so it will be a while until it can make more of it’s kind.

It’s not easy being a baby tortoise.

Why are they endangered?

Giant tortoises were doing just fine on the islands before humans turned up in the 16th Century. The first Spanish sailors to arrive saw so many of them that they named the islands after them -galápago* means tortoise in Spanish. What a sight that must have been.

Unfortunately for the tortoises, they made for a great dinner on a ship. Being able to live for a year or more without food or water, meant they would keep for a long trip and reportedly they had delicious meat. The whaling ships of the 18th and 19th century took advantage of that.

Turtle oil was also collected by the whalers and sold throughout Ecuador. A trip to the interpretation centre on San Cristobal island will show you some horror stories for tortoises.  The photo of one of them strung up to collect the oil with a lamp burning nearby sticks in my mind.

Over the years, hundreds of thousands of tortoises were taken from the islands.

Boats also brought new enemies. Rats wandered off the ships and started eating the baby tortoises and their habitat. People brought goats and pigs and they ate the tortoises habitat too, leaving less and less for them to munch on.

In 1974 it was estimated that there were only just over 3000 tortoises left in the wild.

Conservation work has been going on on the islands throughout the 20th century, creating over 19,000 new tortoises. Centres on the islands breed tortoises and aim to release them back into the wild. They also educate people on the tortoises and why it’s so important to keep going with their efforts.

It is well worth building in a trip to at least one of these centres to your itinerary if you are visiting the islands. I went to the following three and can recommend all of them:

*galápago translates directly to turtle on my internet search, but everywhere else I look it is said that the islands were named after the tortoises. Anyone know what the truth is on this word?